Discover our Paris Orly hotel with its Art Deco style and a family-friendly and professional atmosphere. Located in the heart of Paris, in the 14th arrondissement, the Hotel Aiglon is just 14 km from Orly Airport.

The Location of the Hotel Aiglon Paris Orly

The Hotel Aiglon is located at 232 Boulevard Raspail, in the 14th arrondissement of Paris. The closest Metro station is Raspail, accessible via Metro lines 4 and 6.

Located in the centre of Paris, the hotel is close to the Gare du Nord and Gare Montparnasse railway stations via Metro line 4. The latter is served by many lines, such as Metro 4, 6, 12 and 13, but also by Transilien line N and the TER. 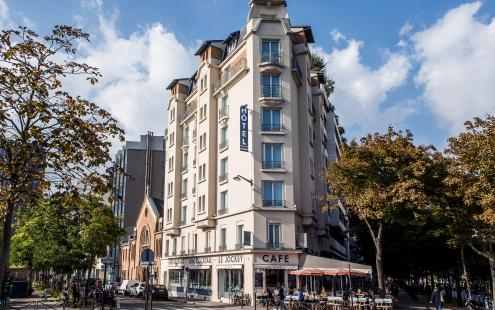 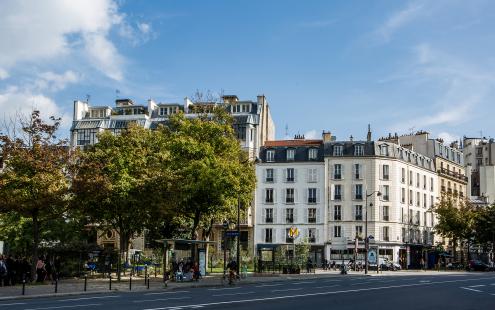 In addition, we are located near the Port-Royal and Denfert-Rochereau stops, accessible via the RER B, which terminates at Charles de Gaulle Airport.

Opposite our Paris Orly hotel is a Vélib (bicycle sharing system) station, accessible to all. Vélib stations are also situated at the Gare Montparnasse and Denfert-Rochereau. Unfortunately, there are no terminals for electric scooters and scooters near the Aiglon.

The hotel has a private car park available for €35 per night.

How to reach the Aiglon, our Paris Orly hotel

The Hotel Aiglon is accessible via 3 modes of transport: by car, by public transport and the shuttle service. The concierge service of our Paris Orly hotel will arrange your airport-hotel transfer at an additional cost. This applies to both Orly Airport and Charles de Gaulle Airport.

You can easily reach our Paris Orly hotel by car from Orly Airport, as we are just 30 minutes away. All you have to do is take the A106 autoroute, then the E5 or the A6B autoroutes.

Access to the Hotel Aiglon from Charles de Gaulle Airport is via the Nord autoroute, also known as the A1, and then the Boulevard Périphérique de Paris ring road. The journey takes about 50 minutes.

The Hotel Aiglon offers a private parking facility. On request, we will reserve a parking space for you at the price of €35 per night.

Via the RER & Métro

The Hotel Aiglon can also be reached with ease by public transport, thanks to the numerous Metros, RER and paid shuttle services.

Raspail Metro station (lines 4 and 6) is right in front of the hotel.

Access via paid Orly shuttles
The City of Paris has set up a paid shuttle service that provides a link between the Paris Orly Airport terminals and Paris, at a price of €9.30 per ticket. This automatic shuttle, called the Orlyval, is accessible from the Antony station of the RER B.
In addition, there is also the Orlybus, another paid shuttle service offered by the RATP that stops near our Paris Orly hotel. This bus service provides a link between the Place Denfert-Rochereau and Orly Airport.